Time travel has been of primary interest to science-fiction fans for almost as long as sci-fi has existed. Sure, wars of the worlds or journeys to the center of the Earth are incredibly captivating science-fiction scenarios, but if the rules of physics as we know them could be bent in any imaginable way, who wouldn’t jump at the chance to travel through time? As modern inventions like electricity and powered transportation began to take hold, changing the technological landscape, writers’ imaginations began to run wild with fantastical stories of things that may have been impossible, but might not always be so.

So we’ve compiled a list of the Best Time Travel Books, though you’ll notice a few big titles are missing. Kurt Vonnegut’s magnum opus Slaughterhouse-Five, and its protagonist who has come “unstuck in time,” certainly deserves a place here, but we’ve already covered that book in our Best Novels list. And this list wouldn’t be complete without mention of Audrey Niffenegger’s best-selling The Time Traveler’s Wife, but that book was already touched upon in our list of Best Romance Novels. But that still leaves us with four titles that changed the way we think about that nature of time—books that deserve a few hours of yours. 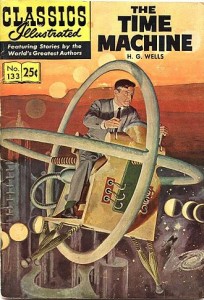 The Time Machine by H.G. Wells

Our modern fascination with the concept of time travel was jump-started in 1895 by the fantastic mind of H.G. Wells. An author who also gave us such classics as The War of the Worlds and The Island of Doctor Moreau, H.G. Wells was the first to write about the use of a piloted vehicle in order to travel through time. “Time machine” is now a common term within science-fiction, and it was all thanks to Wells and his novella about an English inventor who comes to understand that time is simply a fourth dimension, and who is able to develop a means to transport himself into brave new worlds from other points in time. 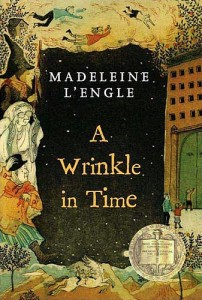 A Wrinkle in Time by Madeleine L’Engle

Who says science and religion don’t mix? Madeleine L’Engle’s Newbery Medal winning science fantasy novel A Wrinkle in Time combines her religious views on battles between good and evil with a time travel story for the ages. When high school-aged girl Meg Murry’s scientist father is held prisoner by evil entities from another planet, she teams up with her younger brother and friend to travel through time and space to rescue him. The book was so unlike anything of its era (it was released in 1962), that few publishers wanted to take a chance on it, and despite its subsequent popularity it has been frequently challenged. Yet A Wrinkle in Time remains a classic of young adult fiction, and sci-fi in general. 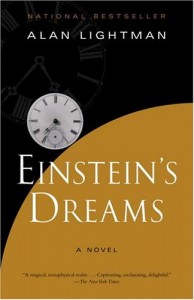 Albert Einstein changed what we thought we knew about time and space. Imagine what the dreams of such a brilliant mind must have been like! Author Alan Lightman does just that in his 1992 novel. Each of his book’s 30 chapters explores one of a fictionalized Einstein’s dreams as he struggles with developing his theory of relativity. Each dream delves into a different concept of time, with some of them hinged in reality (such as relativity) and other consisting of wildly imaginative renderings by the author. The book is otherworldly and vivid and one of the more unique reads on the subject of time travel you’re likely to encounter. 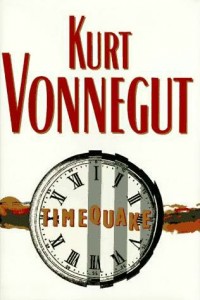 Vonnegut’s Slaughterhouse-Five may forever be his most remembered time travel book, but his final novel, Timequake, did an equally fine job of both bending our concept of reality and in providing a semi-autobiographical account of the author’s life. Vonnegut uses the imagined phenomenon of a “timequake” to ruminate on determinism and craft a story about free will being a fantasy. In the book, the timequake thrusts the entire world back from the year 2001 to 1991, with everyone forced to act out the same actions over that 10 year period with no hope of deviation. The book focuses on the sadness experience by people who are forced to watch themselves repeat mistakes and relive the consequences of bad choices over and over again.