Food has never been a bigger part of pop culture. While food as entertainment was once largely in the hands of Julia Child and other notable hosts of cooking shows, or in the grating infomercials of kitchen gadget hucksters like Ron Popeil, these days food as entertainment takes nearly every conceivable form. We’ve got TV shows promising to make up-and-coming chefs into superstars, reality shows focusing on cake-makers and other specialty food creators, and no shortage of popular YouTube cooking stars.

But food culture today seems to be far more complicated than it once was. Many people have shifted towards vegan and vegetarian diets for health and/or ethical reasons. Others are now jumping on the bandwagon to shun gluten. And GMO labeling is a hot topic these days both in the kitchen and at the ballot box. Meanwhile, bloggers such as the “Food Babe” have gained fame and notoriety by launching crusades (based on spurious claims) against ingredients in food that they view as unnatural “chemicals.”

In this climate, there’s even greater reason to learn more about the stuff we put into our bodies. Food history, current cultivation and manufacturing practices, and beneficial or innovative preparation methods all play a key role in gaining greater understanding of the substances that fuel us. That’s why the following books about food are so important.

If reality TV is to be believed, working in swanky restaurant kitchens is a goal worth striving for. The ability to craft beautifully-presented and delicious food is an art form after all. But Anthony Bourdain lays out exactly why making it in the restaurant business isn’t for everyone in his behind-the-scenes book Kitchen Confidential. Bourdain paints a picture of an industry full of misfits who have a drive to cook that borders on obsession. He shows how the high tension atmosphere is one where only a particular type of person can succeed. More than simply give the reader a peek behind the kitchen doors, Bourdain also gives tips about how diners can ensure they get the freshest and best offerings from restaurants they patronize. 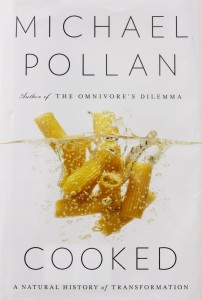 Michael Pollan has written more notable books than Cooked. He’s perhaps best known for The Omnivore’s Dilemma, and The Botany of Desire is another of his well-received works. But Cooked provides some incredible insight into how humans have evolved into the only animals capable of cooking and the only animals that basically require cooked food in order to survive. Pollan details how humans have incorporated the elements of Fire, Water, Earth, and Air to make our food. He roasts whole hogs on Southern BBQ spits, makes delectable pasta, ferments alcohol and kimchi, and bakes bread with world-renowned masters. Pollan does all this while examining the history of how we maximize the nutrition of deliciousness of food through methods that are unique to our species and that vary widely from culture to culture. 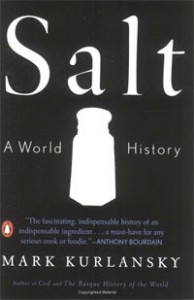 You wouldn’t think that salt would make for very interesting subject matter. That’s not the case when placed in the hands of Mark Kurlanksy. Salt: A World History manages to be an enticing read through the entirety of its 450 pages about the only rock that humans eat. Kurlanksy covers 5,000 years of human history and our relationship with sodium chloride. In fact, throughout our history, salt has found a way to play key roles in society and culture and has often been found at the center of both conflict and drama. You may think that a long book about a condiment would be a drag. Kurlansky proves that even something as seemingly mundane as salt holds a fascinating history. 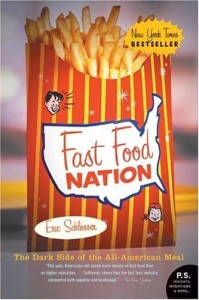 Investigative journalist Eric Schlosser highlights perhaps the least nutritious aspect of human consumption in the modern era: the fast food industry. Schlosser begins his book by going into detail about the history of fast food and how it came to be as American as mass-produced apple pie. But he takes his most controversial turn when he delves into why fast food tastes so good and how the food is produced. He doesn’t hold back in his analysis of the meatpacking industry, framing it as both an incredibly dangerous and unpleasant place to work that also provides dangerous bacteria like E coli a haven to propagate. Before you hit the drive thru, you should probably give this book a read.